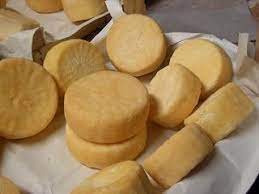 The production of this cheese has ancient origins and is related to the use of raw milk from Podolico cows that were used for agricultural work. Currently milk from normal breed cows (Bruna, Friesian, Simmental) is used, but the technology has remained largely unchanged as raw milk is still used. Cheese maturation to larger sizes (such as grated cheese) and baked Easter cheese (fiadoni) are produced in 500-800g forms.

It is consumed fresh (a few days), raw or toasted or after 15-20 days when the surface shows flaking. On the surface are marked the small grids of the typical wicker baskets used for molding. The product is fresh, fragrant and aromatic. The paste is white, juicy and chewy, with small holes, and is slightly elastic when fresh, although it is slightly waxed.