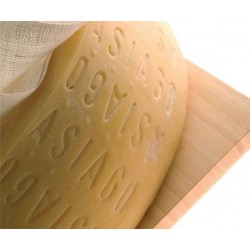 Ingredients: milk from two milkings, one of which is skimmed from Black Pied breed (60%) and the other Bruno-Alpine (40%).

Processing technology: taking the raw milk to about 35 degrees, add rennet in powder or liquid, if necessary, to plug-ferment. Coagulates in 20-30 minutes. After breaking the curd,made with the "thorn" or the "pound" (a size of a grain of rice or wheat), it is cooked in two stages: a first and a second at 40 degrees to 47 degrees. After these operations, the mass is left to stand in the serum and then extracted and placed in wooden molds. It is then replaced with another plastic in order to give the brand Doc's Dry salting is carried out on the forms or in brine bath for a few days. It matures in 90 days, at a room temperature of about 17 degrees and 80% humidity; where the forms are turned over every 3-4 days, anointed with special oils once a week and spazzollate once a month. Seasoning: 6-12 months to 2 years or so. Yield from 7 to 7.5%.

Note: We have news from the Middle Ages, on the production plateau of Asiago cheese. The cheese, until the nineteenth century, was called "Doggy Style" ("pegorin"). The manufacture of dell'Asiago (prevailing at the end of the last century, the plateau of the same name) gradually extended on the foothills, plains and even in nearby huts in Trentino. It was called "the breed" because it came from a seasoned real farm. It is called "pimp" or "Asiago medium" when it is at least 6 months and becomes "Asiago old" when it passed a year in age, then "Asiago very old" when it is 2 years of age. Recognized with Presidential Decree of 21.12.1978 Doc.