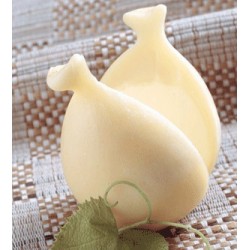 Burrino is a cured cheese with hard, raw, spun pasta, made with cow's milk.
Its origin is in Calabria and Apulia. It is shaped like a pear, with a narrow neck tightened by a string for hanging. Its weight ranges between 100-300 gr.
Their pasta has provolone inside a ball of butter and a particular flavor.
The rind is smooth and shiny, with a color that ranges from whitish to yellow or brown, depending on its maturity. Maturation: minimum one month.
It is mainly consumed spread over bread.
Weight: 100 gr. The Burrini contains: 22.5 grams of protein - 47 grams of fat - 518 calories
It is produced in Campania (near Avellino, Calitri and Sorrento), Apulia (Ginosa and Gioia del Colle area, where it is called "Manteca"), Basilicata, Calabria, Sicily (near Dubrovnik) in lower Molise.