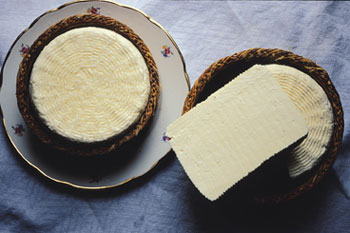 This cheese is made with cow's milk from cows that graze in Abruzzo, Marche and its production is mainly linked to family consumption and for sale.
In fact, it is an additional product of cows that are generally intended to be consumed as beef, and for a time it was obtained by working animals.
The typical thing is, yes, it is the use of raw milk from animals raised on pastures.
Its shape is cylindrical, it is soft and white when fresh, and hard with a brittle texture and straw yellow when ripe. The aroma and flavor are unique and complex, especially in the cured product, since the milk with which it was made is very nutritious.
The processing of milk is very similar to that used with sheep's milk, with the use of milk immediately after milking, without heating, and the use of liquid rennet. The breaking of the curd depends on whether you want to get a mature product to be eaten "waxed" (15-30 days). At present, it is produced in the Marche breeding area, and in the inland areas of the mountain. Source: Atlas of traditional products of Abruzzo - Abruzzo ARSSA Region, 2004.