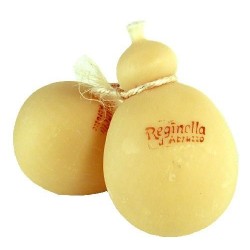 This cheese is traditionally produced in the areas bordering the Abruzzo Molise (Chieti and L'Aquila provinces) where it is produced in medium-sized dairies. In some cases, wooden tubs and containers are still used, which also serve as process initiators.
After the milk has coagulated, the curd breaks down and begins to acidify, in some cases with the help of sieroinnesto. The curd is cut, acidified and treated with hot water so that it can be stirred. Spinning and forming are done by hand. The shapes obtained, globular, pear-shaped and weighing 3.1 kg, are connected at the top and given in pairs, to be immersed in cold water to tone them and then placed in brine where they remain for 12-20 hours. Once the forms are salty, they are put to mature for about 20 days in a cool and dry place, hung on horizontal sticks (hence their name) and then the maturation that goes from three months to two years follows. The cheese is compact with the typical flaking shape, it is pale yellow to dark yellow. The flavor is sweet and smooth when consumed fresh, and it becomes intense and spicy over time. Source: Atlas of traditional Abruzzo products