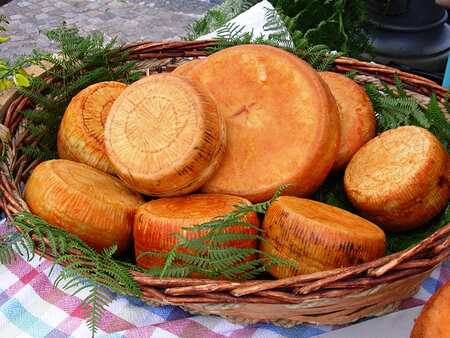 Territory concerned with the production: the province RC.

Product description: INGREDIENTS USED: The goat's cheese Limina is obtained exclusively from goat's milk of the indigenous race. SHAPE: Round. AVERAGE WEIGHT: Half Kg. TASTE: Strong tendency = spicy intensity varies with the changing seasons. SMELL: The scent is intense and persistent. COLOR: The color is pale yellow exterior, the interior is white.

Description of methods of processing, storage and aging: WORK PRODUCT: Only manual. TECHNICAL WORK: Pour freshly milked goat's milk into a saucepan. The rennet is dissolved (product obtained in the same company, obtained from the stomachs of kids and ripened) in a little water and pour in the raw milk. You mix it all and let it cook for about an hour. When the contents thicken, stir with a wooden spoon, until it becomes liquid again. Slowly pull the cheese separated from the "snare" (milk fat) with your hands and put it into the forms of cane - squeezing until it is well drained. After that, it puts it in shape for one more day, then is taken off and allowed to mature. A thin layer of olive oil is sprinkled over the entire surface. These special production techniques make the goat's cheese Limina a typical product of great value. SEASONING MATURITY OF THE PRODUCT: 8-12 months in the cellars where it is treated consistently through the emulsion of olive oil and vinegar. Material, equipment and premises used.

MATERIALS AND EQUIPMENT USED: Cauldrons steel heather and wooden spoons, containers of cheese, which are called "fasceji" (made of rattan) in round, "masterja" (used as a kind of drip tray table for olive cheese, " culaturi "(steel to filter drains milk)," miners "(wooden stick tipped branched). Evidence of the traditional character: The cheese is made from using the milk of goats from various breeds that are grouped in herds and bred in mountainous and hilly areas. These animals are well adapted to local climate, and have an excellent performance. The milk produced is of high quality due to to the great variety of grasses found in their pastures.

The commercialization of the goat is made directly from manufacturers and through the local shops. In recent years the production of goat decreased, because some farmers have replaced goats with dairy cows as they are considered more profitable. The goat 'scheese is considered the oldest and must be kept for about 8-12 months, in order to be cured, in the cellars where it is constantly kept low through the emulsion of olive oil and vinegar. Sometimes, ground pepper can be added.

The goat cheese Limina is used in dishes from Calabria, in particular for the production of stuffed eggplant (typical recipe of the territory), grated on pasta, homemade meatballs, in omelets or stuffed in general. The cheese varies in flavor depending on the length of the ripening. It is also used as an appetizer and dessert tasting with local wines from Calabria.